The intent of my blog was to engage and that it did, having now over 149K views!  I realize along the way I’ve had my share of critics and haters while at the same time giving them a media outlet they would not have otherwise had.

To the supporters of my cartoon blog I will forever be grateful and indebted.  For it was your steadfast enthusiasm and encouragement that kept me at the digital drawing board day in, day out….

But this is no longer my city, it is on a due course I as a senior artist cannot follow or bank on.

Here is my last curtain call dedicated to our infamous mayor – Density Darrell R. Mussatto… the stage is all yours one last time – Grinch.

None of life’s strings can last
So I must be on my way
And face another day. (Harrison)…
Where affordability is always at play. (Stache)

Wannabe night-mayor Linda Buchanan… you know the one who tried to pull the wool over everybody’s eyes by voting against her buddy developer Darwin Construction by not voting in favour in the devastation of the Harry Jerome Neighbourhood.  KNOWING DAMN WELL non city resident Councillor Holly Back was in favour of the project thus enabling an uncanny swing in favour of the 800+ residential log jam increase to the community and guaranteeing a $237+ million Harry Jerome Sportsplex!  #timeToChangeCourse  #Vote4ChangeOct20 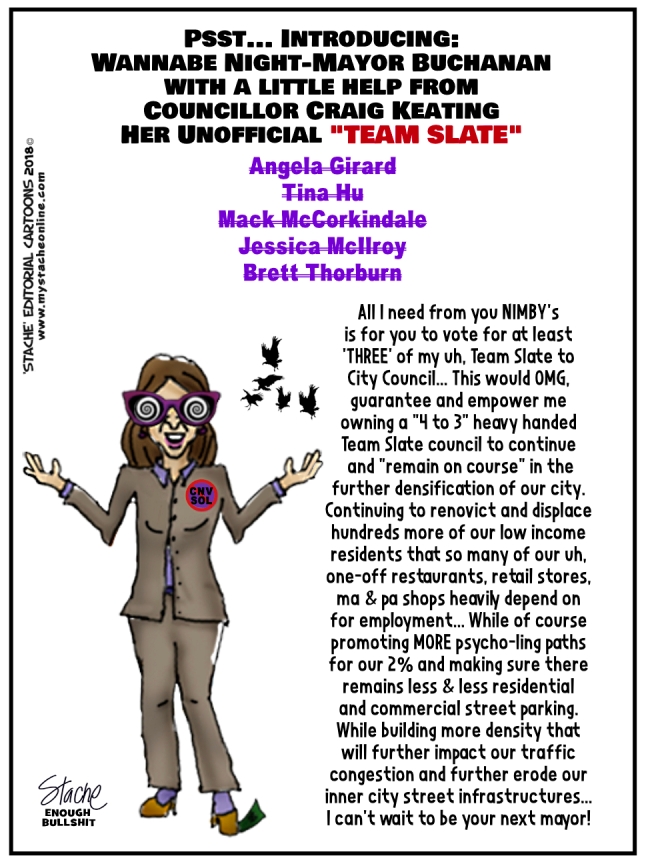 Our developer donor indebted mayor and “unelected” city clerk, new CEO and in-Epp OCP Planning Director have had more than enough time since July 23rd’s last meeting to over agenda-size and proceed to ramrod their hyper-density agenda through tonight’s expected (yawn) city council 4 1/2 to 5 hour meeting.  And don’t expect the 3 remaining city council meetings to show any less mercy when it comes to pushing through the mayor’s Manhattan CityShaping final and Last Testament…. all aboard. 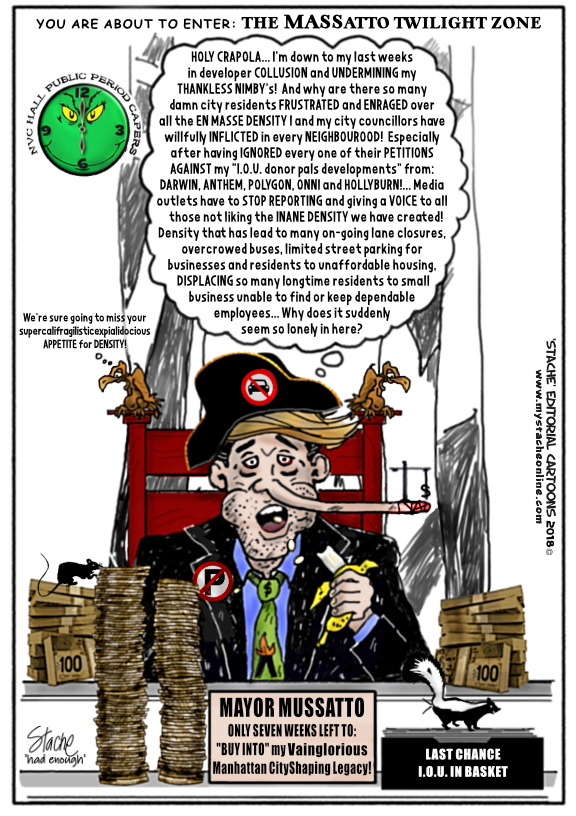 Earlier this month there was an interesting Vancouver Sun online article by Kennedy Stewart: “Time to get big money out of Vancouver City Hall for good.”  He is also running as an independent in their 2018 mayoral race.  Stewart’s mayoral platform revolves around 4 measures in how to improve local city democracy while strengthening and enhancing public trust in their city-council decisions regarding development.  https://vancouversun.com/opinion/op-ed/kennedy-stewart-time-to-get-big-money-out-of-vancouver-city-hall-for-good?video_autoplay=true

His four measures: 1. Time for cooling-off rules, 2. Tighten conflict of interest, 3. Implement lobbyist registry, 4. Daylight campaign financing – which from my POV should be mandatory in our upcoming city elections – wouldn’t you agree wannabe mayor Linda Buchanan.

Measures asserting transparent democracy back into our local politics…  Which of course will never see the light of day, in any of our remaining four: good riddance 2014 convoluting city council meetings. 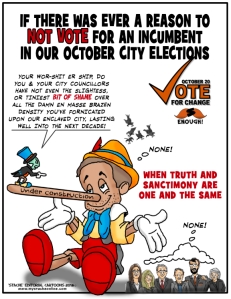 When it comes to housing affordability on the North Shore much like in Vancouver City; it is becoming more and more unattainable for our seniors/pensioners, fixed and low income earners and yes our Millennials and generations thereafter.  The reality and future economic and social wellness of our city is in dire straits with not only small business leaving or considering to leave but so are our Millennials having had enough!  Unwilling to pay soaring rents with no return on their investment with up to 4% rental hikes each and every year thereafter…  #time4millennialsMoveOn

Any Millennial family trying to save for one of our ridiculously overpriced $1 to 1.5 plus million priced homes/condos will take them IF they are able to save 20% of their approx. $68K annual income up 20 YEARS compared to Toronto 4.6 yrs. and Edmonton’s one year!.  source: Star Metro Vancouver: Aug. 1/18 & Point2Homes: https://www.point2homes.com/news/canada-real-estate/average-national-home-price-buy-bedrooms.html

It’s becoming more and more apparent why our North Shore culpable density mayors: Mussatto & Walton are unwilling to run for re-election in cities they have fornicated beyond recovery… and thus tarnishing their vainglorious legacies.  What they don’t realize is their legacies have already been condemned for ever and ever amen. 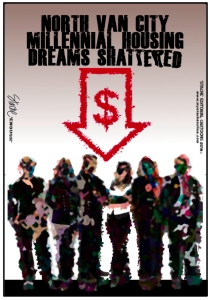 My morning CoffeeBrew crowd have ordained Councillors Back, Clark, Bell & Bookham as the “Four Horsemen of the Harry Jerome Apocalypse.”  The density flood gates are forever open thanks to these four despicables.  And developers will make damn sure Darwin’s “city council” approved 30 tower is the new density bar, aka height standard for all new projects north of 17th Avenue.  #CollusionGluttonyHypocrisySabotage

Well at least those of us north of seventeenth like me know who not to vote for on October 20th.  It is also a good reason why we should also release (if we only could) our city administrators i.e. OCP City Planners and Engineers who have embraced the new towering heights demagoguery north of 17th and every other high rise project throughout our city since 2014.  Anti NIMBY’s who have made a complete mockery out of our OCP and on the record City Planning Dir. Mr. Epp repudiating Regional Growth Strategy Levels now sitting somewhere beyond 2041 population growth levels.  #CityHallCorruption

And lest we forget and never ever should we let wannabe night-mayor Buchanan off the hook.  EVERYWHERE you turn you are sooner than later faced with a “Buchanan” detour, a lane closure, a construction site delay or left frustrated trying to find street parking in and around every damn construction site.  Especially right now on Keith Rd. east and on 3rd Street between Queensbury and St. Andrews – what a bottlenecking nightmare they are during 3 to 6 pm rush hour!

EVERYONE of these developments, including the new Hollyburn apartment project which is of course thanks to our developer compliant city hall is permitted to shut down the curb lane at the intersection of Lonsdale and 13th for the next couple of years at their leisure.  You can emphatically BLAME BUCHANAN and her fellow Mussatto Team Slate that includes non city resident Holly Back.  Despicables who IGNORED EVERY Hollyburn neighbourhood petition, Public Hearing and emails against this colluding project… More city resident voters you can “count on” not willing to elect any Mussatto Team Slate collusion member running in our October 20 civic election.  #Enough2014CityCouncil 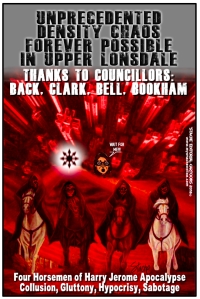 Our Metro Vancouver mayors (especially our density demagoguery mayor) must be so damn proud being the “runaway leaders in Unaffordable Housing in the entire North American Continent!” – congratulations uppity Grinch-like city council stooges!  A banner that will FOREVER DEFINE & ENTOMB your infamies after having deliberately put the cart: too much unaffordable housing ahead of the horse: sustainable affordable housing!
source: https://thetyee.ca/News/2018/07/13/Vancouver-Leader-In-Housing-Unaffordability/

Our housing unaffordability crisis will not be overcome or resolved by the eminent upcoming October 20th fresh out of the box elected city councils.  It will take more than 4 years – perhaps up to a decade before Metro Vancouver’s social and housing wellness will inherit any kind of genuine housing semblance…

unless there is as some housing experts are forecasting – an impending cataclysmic unaffordablility housing collapse!  #HousingBubbleBurst

… Meanwhile our infamous city council will in September continue affording projects like NV Museum & Archives more money after they shoehorned themselves into a horsetrading Polygon Esplanade towering location i.e. being in desperate panic mode to find a new home, recklessly misappropriating their move-in setup/display costs.  Consequentially leaving them with a $550k shortfall egg on their archival faces…